Interview with US Asst.Secretary of States Mr.Robert Blake.

(Recently, I chanced upon to meet Mr.Robert (Bob).O.Blake, Assistant Secretary for Department of States & in-charge of south & central Asian affairs.He was in India along with Secretary Hillary Clinton for diplomatic talks with her Indian counterpart S.M.Krishna. Mr.Blake has also served as a diplomat in India & Sri Lanka.Few years back he survived an attack by LTTE in Sri Lanka. Here are excerpts from the on camera interview with Secretary Blake.) 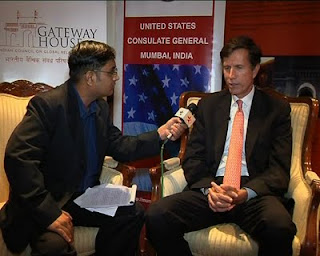 1)  Mr.Secretary,  has been harbouring some of the most wanted terrorists of India & United States on its soil. In the case of United States you have carried out an operation & killed your deadliest enemy Osama bin Laden, but for India some of its most wanted terrorist like Dawood Ibrahim, Maulana Masood Azhar, Zakir ur Rehman & others have still got safe haven in Pakistan. You say that is your partner in the war against terror, then will US do something concrete so that these terrorists are handed over to ?
Answer: Secretary was very clear in her venture in that has an obligation to prevent terrorism on its soil to prevent attacks on  friendly countries like and U.S, but she is also very clear that we need to work closely with . We need to engage Pakistan because it’s a country that faces many challenges now, economic challenges, energy challenges, security challenges and so we have an important effort under way to help them meet those many challenges simply through increased civilian assistance through the Carrey Berman Legislation…so we are pursuing these tracks. 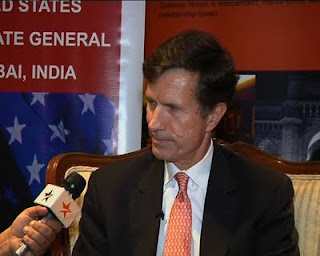 2)    Mr Blake, what do you feel ’s stand should be after getting evidences of numerous terrorist attacks which were planned on Pakistani soil & executed in ? How do you think should react every time?
Answer: Well again I think India has responded very appropriately by taking a very firm line on the need  of greater progress by Pakistan not only on the trial of those who are responsible for terror attacks but also to dismantle some of the camps that exist and more broadly just to stop terrorism that eliminates from its soil. At the same time as I said has undertaken this very important engagement process. I understand that the two foreign ministers will be meeting later this . This is a progress that we need and  the pace, scope and character of that dialogue of course is up to India & Pakistan friends… but it’s something to applaud. 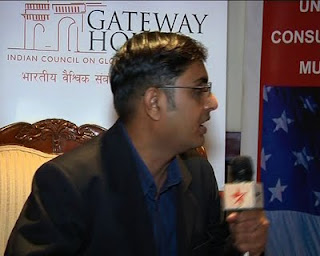 3)  Mr.Secretary, what is your take on the reports that post Abottabad operation by Navy Seals, US-Pakistan relations have destabilized & distrust is seen taking place?
Answer: Well again the secretary has always been very clear that our relations with are complicated. There has been some progress since the Abbottabad raid but truly much more is needed and our leaders have been very clear about that and are again working very closely with Pakistan to try and achieve that progress.
4)Today itself a news report has come that Gulam Nabi Fai a person who was working for I.S.I has been arrested by F.B.I in . He was campaigning against India and also networking with politician in U.S. So, in such a case where you find a person who is conspiring against a friendly country on your soil what kind of action or what kind of a response will be of U.S ?
Answer: In it’s illegal for foreign individual to provide funds to people who are running for federal office of some sort for example Congress. It’s also illegal for people to be acting on behalf of a foreign government without registering under our appropriate laws. So in the case of the individual Gulab Nabi  Fai, he had neither disclosed his association with nor had been cleared that he himself was representing  a foreign government in making campaign contribution. So he was arrested and will be prosecuted.
at 19:01:00 No comments: