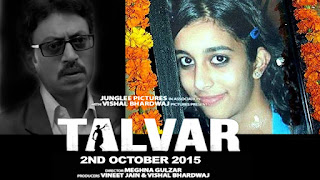 You must have read writeups on shocking similarities between Abraham Lincoln & J.F.Kennedy's assassinations. We have a similar story in India also, not related to murder of any politicians but of 2 young ladies in different parts of the country.Just viewed movie "Talwar" & the story made me compare Arushi Talwar's murder case with Mumbai's Sheena Bora murder case. I was following newsreports  of this case till few years back and "Talwar" helped me to get back on the chronology and do some supplementary reading on the case. Those crime reporters who have seen "Talwar" & covered Sheena Bora murder case may notice following parallels between the 2 cases :

1) The 1st investigative team was negligent:
In Arushi's case it was UP Police & in Sheena's case it was Raigadh Police. If both had done their basic work sincerely in the beginning both cases would have been detected much earlier.

4) Motive of murder is still not clear in both the cases.

6) In both the cases drivers of the families were also named as accused.
at 17:04:00 No comments: