Balasaheb whom I knew... 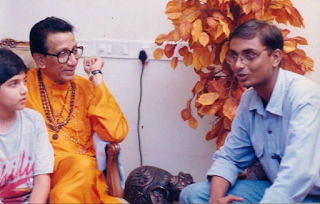 Today is Balasaheb's death anniversary. As a journalist I have met & interacted with him on several occasions and have covered many events related to him and his party like Shiv Sena's defeat in 1999 Vidhansabha polls, Narayan Rane and Raj Thackeray quitting his party, introduction of Aditya Thackeray in politics by him in a rally at Shivaji Park and ultimately his demise in 2012.

Everybody in my family revered Indira Gandhi but after her assassination in 1984, my family noticed that her qualities were reflected in Balasaheb. Although, unlike Mrs.Gandhi, Thackeray was a regional leader but displayed same aggression and made impact on crowds through his oratory and style. Thackeray's Shiv Sena was formed to champion Marathi cause but by 1987, he gave it a colour of hardcore Hindutva organisation. This led to a connect of Shiv Sena even with non-Marathi speaking families like mine. Infact, one of my relatives became an office bearer of Shiv Sena's local unit in South Mumbai.

To be honest, I was also in awe of Thackeray's personality during my student days which continued till initial days of my career as a journalist. This might be due to my family's influence and also Thackeray's skills to connect with the youth through his speeches and writings in Saamana. Once in 1995, when I was in class nine, I bunked my tuition class and went to Dadar on a local train without ticket to attend his election rally at Shivaji Park. I was overwhelmed with happiness by listening to him and seeing him in person.

Two years later, I joined Hindi edition of Shiv Sena's mouthpiece Saamana as it's campus reporter and south Mumbai stringer. I was pursuing my B.A in Political Science from Wilson College then. Considering my association with Saamana, the Wilson College unit of Bhartiya Vidyarthi Sena which was then headed by Raj Thackeray offered me a post. However, I declined the offer thinking that it would affect my studies. Already, job with Hindi Saamna was consuming much of my time. This way, I missed an opportunity to enter politics and in the hindsight I believe it was for good.

After Shiv Sena-BJP combine came to power in 1995, most of the people working in Saamna behaved like they too were part of the government. Some behaved very arrogantly and disrespectfully with senior cops and government officials. They had a notion -"Ab to apna hi raaj hai. Jo karna hai bindass karo". Few complaints reached Thackeray's ears and he gave a stern warning - "Balasaheb is just one. Everybody must not start thinking that he is Balasaheb".(Sab koi khud ko Balasaheb na samjhe)

Smitha Thackeray, estranged wife of Balasaheb Thackeray's son Jaidev had become very powerful those days. She held good clout in film industry. Once I was working for a story which was against somebody known to her. I called that person for his version, but instead he told me with confidence -"Why are you wasting your time?This story is not going to be published in Saamna". He was right. When I reached office with the story, Smitha Thackeray's phone had already come. Sanjay Nirupam, my then boss, reprimanded me softly. Story was never published.

During my stint in Saamana, I met him just once, when Shiv Sena organised an Uttar Bhartiya Mahasammelan in Andheri Sports Complex. The event was organised to connect with north Indians. Hindi Saamana's then executive editor Sanjay Nirupam was key person for the event and everybody working for Hindi Saamana including me was part of the organising team. During the speech Thackeray said to the north Indian crowd - "So what if you are called Bhaiyas? Even we Marathis are referred to as ____", he said.

My interactions with Balasaheb became more frequent when I quit Hindi Saamana and joined Aaj Tak as a TV reporter.  Knowing that I had worked with Saamna he said - "Anybody who has worked with Saamana is a Shiv Sainik. I will call you TV waala Shiv Sainik", he said smilingly. It is another story that me and my cameramen were about to be lynched by Shiv Sainiks in 2002 at Thane.

In 1999 on the day when Vidhansabha election results were declared, I alongwith India Today's V.Shankkar Iyer interviewed him late evening. Shiv Sena-BJP combine had lost the elections and it was a big setback for Thackeray. But during the interview, he maintained a calm posture and answered even bitter questions gracefully. It was unusual for a person who was known to lose his cool even at a slightly irritating question by journalists. History tells that,  journalists were humiliated in his press conferences for asking "unpleasant" questions. Before going for the interview I was worried that he might be in a bad mood and would not answer tough questions. That turned out to be my overthinking.

In my several meetings with him, I noticed that Bal Thackeray was a very different person when he was on stage or on camera and when you met him personally. He appeared to be a very soft spoken, humble and down to earth person contradicting his on stage avatar of being an arrogant, badmouthed and proponent of hate. Thackeray's persona led me to draw parallels between him and some "encounter specialist" cops who too had dual shades of their personalities. Looking at their gentlemanly  behavior, it was hard to imagine that these people chased and killed gangsters.