What happens when you bid for property of Dawood Ibrahim : A case study.

Ajay Shrivastava has travelled from Delhi to Mumbai over 40 times in past 19 years to attend the court but still has not been able to get possession of property that he won in an auction arranged by Income Tax department.

The property consisted of two shops in Nagpada of Mumbai & was deemed as belonging to underworld don Dawood Ibrahim. It is under possession of Dawood's late sister Haseena Parker's family.

For the first time in year 2000 IT dept had organised an auction of Dawood's 11 seized properties. The officials waited throughout the day at Colaba's Diplomat Hotel where the event was arranged but nobody turned up to bid. I reported in Aaj Tak next day (which was a 20 minutes news capsule on Doordarshan those days & not a channel) - "Dawood stays in Karachi but his fear still exists in Mumbai. Nobody dares to bid on his property".

Ajay Shrivastava, a lawyer who saw my story sensed an opportunity in the news. It was an opportunity to display his patriotism and also get praise from his party Shiv Sena with whose student unit in Delhi he was attached with. In 1999 he shot into fame for digging up pitch of Phirozeshah Kotla Stadium in Delhi on call by Shiv Sena to protest against playing cricket with Pakistan.

The next bidding was in March 2001. He flew down from Delhi and participated in the auction. He won the two shops after bidding  2.5 lakh rupees. He was the only participant in the auction.

Although, Shrivastava won the auction things didn't turn out as per his expectations. Shiv Sena neither acknowledged nor appreciated his endeavour. Sena Supremo Bal Thackeray even didn't give Shrivastava time to meet him.  Off the record senior Sena leaders said that they had nothing to do with what Shrivastava has done. He had done it in personal capacity without consent of the party.

After winning the bid, Shrivastava went to Nagpada's Jayrajbhai lane where the two shops were located under heavy police protection to inspect the property. However, as soon as he reached the spot, he was gheraoed by a hostile mob who questioned his motive to bid for the property. Somebody shouted - "He is Chhota Rajan's man". Within five minutes he had to leave the spot on advice of local cops who feared that there would be a law & order issue if he stood their any longer. That was the last when he saw of that property.

Soon Shrivastava got a call from Chhota Shakeel, who threatened him subtly - "Vakeel Saab, I think you have deposited the earnest money by mistake not knowing what you have done. Don't pay the remaining amount & get out of it". Shrivastava deposited the amount on third day after receiving Shakeel's call. More calls with open threats followed after that. Meanwhile, IB got inputs that there was a plan to eliminate him & he was provided security by Delhi Police.

Shrivastava petitioned in Small Causes Court to get possession of the property. The respondent Haseena Parker avoided attending the hearings. Instead seven to eight men from Nagpada came in the court premises to intimidate him, he recollects. Shrivastava came in his lawyers uniform to avoid identification. After repeated hearings when Haseena didn't turn up, Shrivastava applied for an ex-parte order. This alarmed her and began taking the litigation seriously. 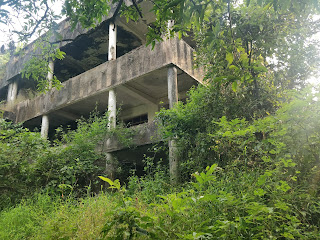 In 2010 the court ruled in favour of Shrivastava & ordered the property to be given in his possession. However, the respondent went for appeal and the matter is still pending since then. In between Shrivastava offered to donate the property to Mumbai Police but then police commissioner A.N.Roy refused to give Shrivastava an audience when he got to know about the issue saying he was too busy.

Shrivastava has decided to pursue his legal struggle. "It not the question of occupying those two small shops. It the issue of challenging and defeating a terrorist", he said. Now Shrivastava is planning to bid for Dawood's ancestral home in Ratnagiri district.